Chat with us, powered by LiveChat
HOME > OUR PHILOSOPHY > VINEYARDS > Maboroshi Vineyard

MEET TOM AND REBECCA KISAICHI OF THE MABOROSHI VINEYARD

Maboroshi means a “whimsical dream” in Japanese; Tom and Rebecca Kisaichi chose this name for their vineyard because it defined for them what owning a vineyard was, a whimsical dream. This dream developed after the two of them had spent time working in vineyards in both California and France. They were originally interested in winemaking but when they realized how much of winemaking is done in the fields, their interest switched and they became interested in becoming growers instead. It took them two years to find the right location, a hillside apple orchard in Sebastopol that would eventually become the Maboroshi Vineyard; during that two year period, Rebecca went back to school to study viticulture.

When they first planted in 1999 and 2000, the soil was tired and they had to work hard to revitalize the soil. They did so through organic farming methods and recently, have implemented some biodynamic practices. Their steep hillside vineyards are not tilled as this could cause erosion, so instead they have goats to do the weeding for them. The number of “good bugs” in their vineyard has increased tenfold due to their cover crops, naturally helping to keep populations of unwanted bugs in check. Rebecca and Tom strive, in their own words, to “(train) and manage our vines through a winemaker’s perspective, in order to produce the best fruit we can and will continue to do so while becoming more in tuned to the flow of mother nature.”

Each spring we look forward to the rebirth of our vineyard as the buds begin to burst, and we feel personally connected to each of our vines as if they were our own children. Nurturing, tending, tempering them through the course of the year. And our reward is their tender fruits.

LEARN MORE ABOUT US 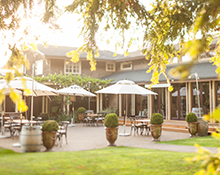 DeLoach Vineyards pioneered Pinot Noir wine growing in the Russian River Valley when Cecil DeLoach, a firefighter from San Francisco with a passion for winemaking, first planted the vines in 1973.  Read More